Let’s use an analogy to urban life and urban planning.  I am all for beneficial modernization.

Philadelphia, like all cities before the 20th century, was a hotbed of infectious disease.  Living in a city meant enduring wave after wave of epidemics, and those who could stayed outside the city until the disease burned itself out.

The departure from Quincy took place in the first week of October [1797], but the Adamses were not to reach the capital for more than a month.  Yellow fever again raged in Philadelphia, as they learned en route, so it was necessary to stop and wait at East Chester…

from John Adams by David McCullough

So the sanitation and medical advances that made cities livable were definitely beneficial modernization.

However, modernization can also be destructive.  After the second World War, a wave of “urban renewal” swept over cities, a wave almost as destructive as any epidemic.  The messy diverse urban reality of the city was to be swept away, there was to be a clean slate, everything would be modern and efficient and the car would be unhindered in its rapid progress through the city.

Philadelphia, why Philadelphia was a blank canvas upon which men could draw their geometric visions, without any of the inconvenient reality of poor people, minorities, women, children or the elderly. 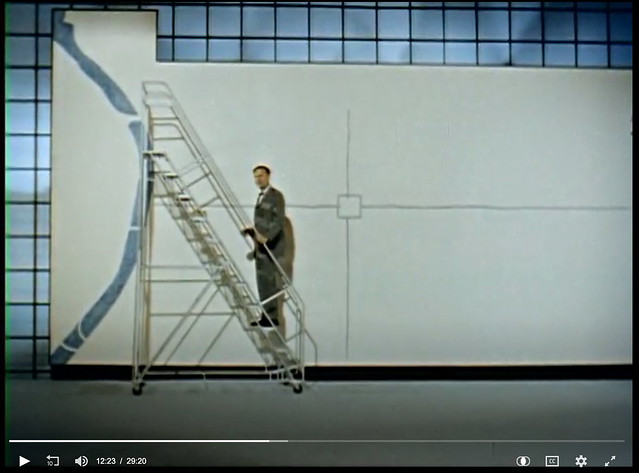 The city would be clean, modern, efficient.  Le Corbusier looked at Paris and instead of seeing beauty, he saw something he needed to fix.  Here’s his idea for Paris, the Plan Voisin 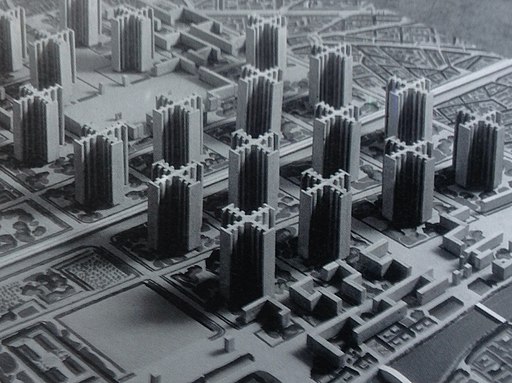 above by SiefkinDR [CC BY-SA 4.0], via Wikimedia Commons

Robert Moses famously pushed highways throughout urban New York, and as in many parts of the US and Canada, the highways often went through poor neighbourhoods, wiping them out or splitting them permanently in two.  Cars would be convenient, cars would go fast. He was only stopped when he wanted the Lower Manhattan Expressway, stopped in part by Jane Jacobs.

This last point, that the sight of people attracts still other people, is something that city planners and city architectural designers seem to find incomprehensible.  They seem to operate on the premise that city people seek the sight of emptiness, obvious order and quiet.

This is part of her explaining her concept of security through “eyes on the street”.

But voting is not a generic service like paying a parking ticket.  Voting is a complex transaction where you need the paradoxical combination of total privacy and total observation.  Voting is also a social contract where a single vote is transformed into trust in the results of an entire national election.  Voting is about being part of your community.  Voting does not need false notions of convenience and speed.  In order to transmute the individual vote into trust in the entire system, voting needs to move at a human pace under watchful human eyes.  Voting is, in other words, a very human activity.  And so when you move it online, when you drive that highway through the messy line of people waiting to vote, you’re engaged in destructive modernization.

If we apply this same test to online voting, we find exactly the same thing: the people that actually vote online are the ones who would vote anyway: older male voters.

research suggests that Internet voting does not generally cause nonvoters to vote. Instead, Internet voting is mostly used as a tool of convenience for individuals who have already decided to vote.

So basically online voting removes the diverse participation and personal experience of casting your ballot on paper, it removes the “eyes on the street” of being able to see the process right in front of you (including the ability of scrutineers to watch the ballots being counted), and it benefits the already empowered people who would have voted anyway. It’s destructive modernization.