The Government of Canada MyDemocracy.ca consultation questions will sort you into one of five “archetypes”:  Guardians, Challengers, Pragmatists, Cooperators or Innovators.  Based on the archetype, it will tell you what you think about online voting.  (Let’s for a moment set aside the validity of an online poll that draws conclusions about online voting, or the validity of this odd sorting hat exercise in and of itself.)

Summary: Please read a briefing about online voting before you answer the questions, but even if you read the briefing, your archetype grouping may not match your answers.

The website doesn’t provide the capsule summaries for each archetype, but some of them have been posted to Twitter (I have to assume these particular screenshots haven’t been altered).  Here’s what they tell you you think about online voting:

…the least likely to support moving from paper ballots to online voting.

Split on the question of whether Canadians should have the option to vote online.

…among the least likely archetypes to support online voting.

…the most open to the possibility of online voting as a means to increase electoral participation.

So basically if you’re opposed to online voting it’s because you’re not “open to” it.  I am “open to” it.  I’ve just spent twelve years following the issue.  I’m opposed because of the evidence.

Speaking of evidence, online voting does not increase electoral participation.  Study after study, election after election, expert witness after expert witness demonstrates this.  I wrote an entire blog post about turnout, it could easily have been twice as long, there’s tons of evidence.  More concisely, here’s what I wrote for the New Brunswick consultation

The questions use an “even if” framing.  Note that they are presented in a random order, so I can’t indicate a specific question number. 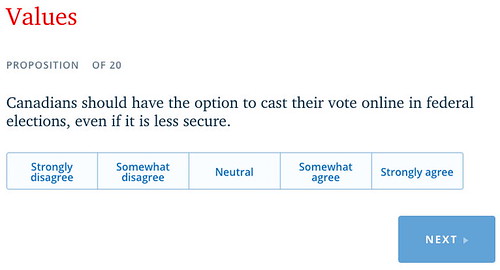 “less secure”?  Less secure than what?  In what context?  Based on what information? 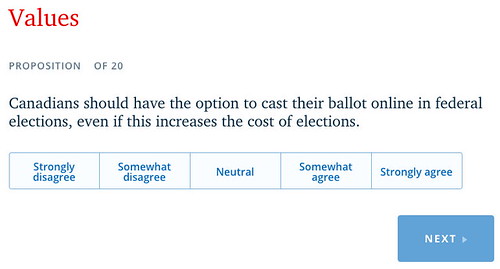 “increases the cost”?  By how much?  A million dollars?  A billion dollars?  What cost, the cost on the day of the election?  The cost to develop the system?  The total lifecycle cost?

But it gets worse… 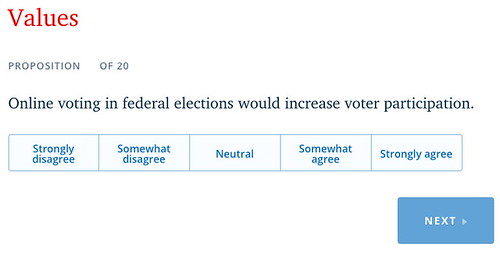 now we’re asking people to express an opinion on something that is provably not true.  I just listed the evidence above.  So it’s basically “do you agree with this thing that is false?” 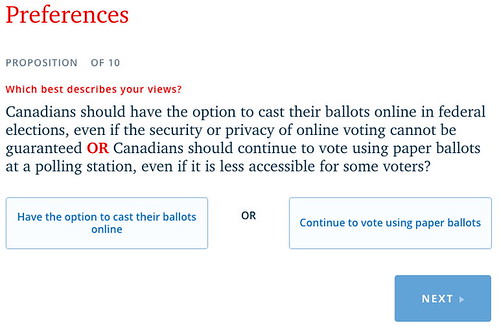 So basically, will you trade (some unknown level of) security and privacy for helping other citizens.

Frankly, I don’t care whether these questions tilt in favour of online voting or against.  What I care about is that they tilt at all.  You’re supposed to dive in with no information and click.  There’s no option at each step to get any context whatsoever.  This is not an informed consultation.

I am all in favour of consultation, but only one that is evidence-based, with a briefing weighing the pros and cons in details.  Instead there is no briefing paper provided about online voting to help provide context for people’s decisions.  I have written a separate blog post about the lack of briefing, in which I’ve provided extensive links to Internet voting reference material.

They put me in Slytherin

You will be unsurprised to find that I answered all of the questions about online voting with “Strongly Disagree”.  This put me to the far left edge of the online voting theme, as the strongest possible supporter of paper ballots, as one would expect.

And then MyDemocracy still clustered me into Innovators, who have the strongest support for online voting. 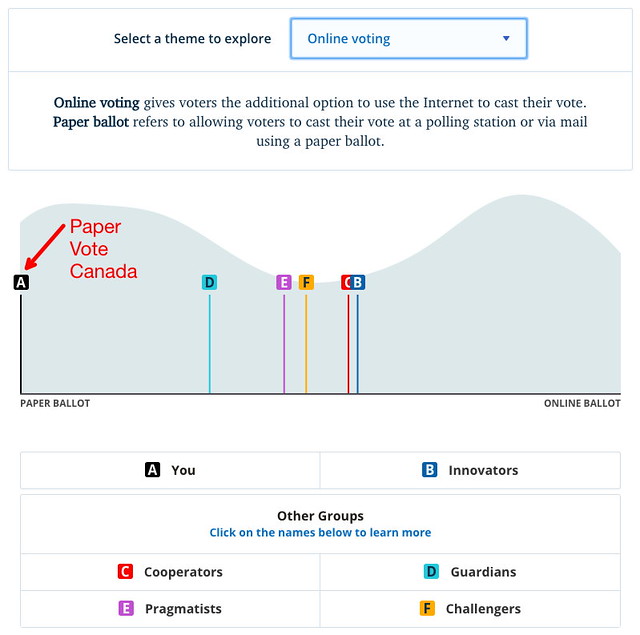 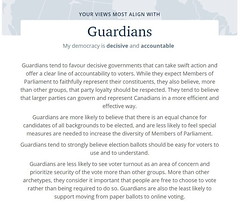 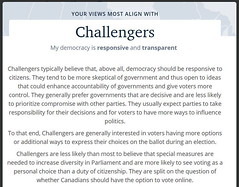 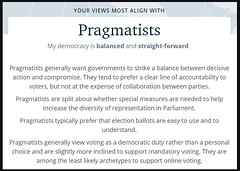 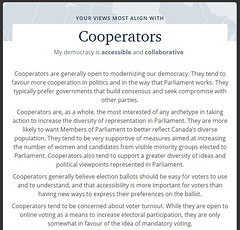 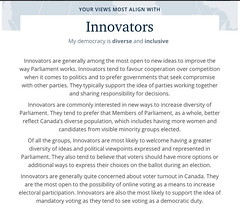 The Government of Canada consultation website MyDemocracy.ca has launched.  This was an opportunity to inform every Canadian household about electoral reform issues, including online voting.

On the site at the very bottom right, you can click to “Learn More”.

Summary: You will not get a comprehensive briefing about online voting from the government no matter how far down the trail of links you go.

My Briefing about Online Voting

Here’s what you could have gotten:

You also could have gotten

Here’s what you will actually get.

Clicking Learn More will take you to https://www.canada.ca/en/democratic-institutions/services/democracy-canada.html

And here’s what that page, entitled Democracy in Canada, has to say about online voting, under How you vote – How you cast your ballot

Today, most of us vote in person by pencil and paper, either on election day itself or in the advance polls in the days beforehand. Many people also use special ballots, which are mailed in or cast at your local Elections Canada office. Introducing new technologies at the polls could pave the way for online voting in the future.

Where does this assertion that “new technologies” (electronic voting) could lead to online voting come from? What evidence supports it?

Where is the discussion paper / issues paper / briefing about online voting?  Why are we discussing electronic voting in polling places at all?

If, by some miracle, you scroll all the way to the bottom of the Democracy in Canada page, you will find two more resources, one from Samara about different types of voting systems that provides no additional information about online and electronic voting, and one from the Library of Parliament.

Clicking the Library of Parliament link will take you to

Ok, maybe now we have a briefing about online voting, providing evidence from various fields of expertise including computer science, and weighing risks and benefits.

Well no, we don’t.  Somehow you navigate your way through the table of contents or through the long text to section 6.2 Online Voting

And if you make it there, you will get, not one page, not 9 pages, not 16 pages, but four paragraphs. With no computer science experts cited.  As I documented in June 2016 in my analysis Online voting section of Background Paper 2016-06-E on Electoral Systems.

I will again express my profound disappointment in the failure of the government to provide an adequate, evidence-based briefing to inform consideration of online voting, particularly given the fact that they had an opportunity to provide information to all Canadians.  And to emphasize my concerns that in addition we are also having a discussion about electronic voting with, extraordinarily, no information or context whatsoever (not even a definition of what electronic voting is, or what technologies we may be considering).

Hashtag for the MyDemocracy consultation isn’t clear.  Presumably #EngagedInER ?  The most common one being used at the moment is #MyDemocracy

For more information about the consideration of electronic voting technologies in polling places, please keep an eye on the future Chief Electoral Officer, Elections Canada, and discussions at PROC, as well as the Ministry of Democratic Institutions.